Mia Teitelbaum specializes primarily in criminal defense and the immigration consequences of criminal convictions, as well as the representation of students in disciplinary proceedings. She has co-authored both state and federal appeals and appeared in district and superior courts across the state on cases ranging from homicides to operating with a suspended license.

Prior to joining the firm, Ms. Teitelbaum worked as an associate at Rubin Pomerleau, PC, where she handled a multitude of immigration matters including managing the firm’s Special Immigrant Juvenile petitions, as well as the firm’s caseload in the Boston immigration court. Ms. Teitelbaum zealously represented scores of individuals in their removal proceedings, winning asylum and cancellation of removal for multiple clients, and obtained Special Immigrant Juvenile Status for many young people through her advocacy in the Probate and Family Court.

A graduate of Northeastern University School of Law and Smith College, cum laude, Ms. Teitelbaum is the published author of “Willful Intent: U.S. v. Screws and the Legal Strategies of the Department of Justice and NAACP,” 20 U. Pa. J.L. & Soc. Change, 185 (2017), an article born out of research through the Civil Rights and Restorative Justice Clinic at Northeastern into the 1943 cold case murder of a young African American soldier, Willie Lee Davis, at the hands of a police officer. The article examines the Supreme Court case that squashed the prosecution of that officer, a case most recently cited by the Department of Justice in its rationale for declining to prosecute the police officer who killed Michael Brown in 2014.

Before attending law school, Ms. Teitelbaum lived in Guatemala and Peru, where she obtained fluency in Spanish. As a law student, Ms. Teitelbaum interned at the ACLU of Massachusetts, the Committee for Public Counsel Services in the Suffolk Superior Court office, the Criminal Division of the Legal Aid Society in the Bronx, New York, and with Chief Judge Patti B. Saris at the U.S. District Court of Massachusetts. 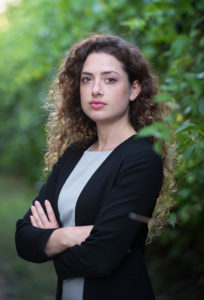